I had the good fortune to have the opportunity to go to COP 27 in Sharm El-Sheikh this year. As a volunteer and representative for the BE Initiative, and a parent who is new-ish to the climate movement, I thought it would be an incredible opportunity to immerse myself into the knowledge and culture of climate action, especially as it pertained to the participation of marginalized voices. I am grateful to the BE Initiative for facilitating my attendance there. 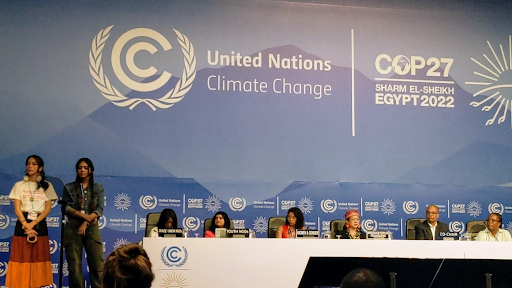 As a member of For Our Kids, I started my journey in climate action from the perspective that climate action and mitigation is about protecting the future of my child and all the children of the world. The reality is that in most conversations about climate change, the voice of youth and children are a minority--if not outright excluded. But the intent of youth-led groups is to get a seat at the negotiation tables: The phrase "nothing about us without us" was mentioned in several youth-led presentations that I attended at COP 27. This phrase also holds true for other groups whose voices are overshadowed by oil companies and major polluters such as Canada (it was dispiriting to learn that the number of representatives from the oil and gas industry at COP 27 was larger than the number of any single country from the global south this year - more on this from the The Guardian here).

The reality is that the people who will be living with the effects of climate change for the next hundred years--young people (especially those in the global south and racialized communities of the north)--haven't been given much of a say in how their future will look, and haven’t had the ability to hold people like me, the older generations of polluters, accountable for our contributions to global climate change.

At COP 27, things started to feel different. Due to the years-long persistence and tenacity of youth and other marginalized groups, their voices are becoming harder for the privileged to ignore. This was embodied by an event held on the second-last day of the conference called the People’s Plenary. 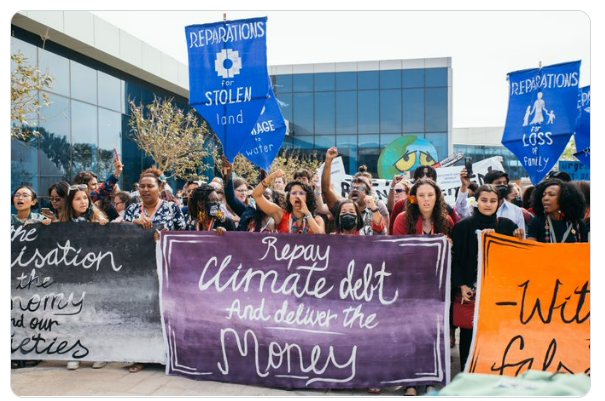 The People's Plenary was a gathering of all those whose voices are typically overlooked by the privileged climate community: youth, Indigenous Peoples, people with disabilities, women & gender non-conforming people, trade workers and environmental justice groups. Many of the speakers at the plenary were representatives of international organizations and groups representing the global south, which will continue to be the hardest hit by climate change. It was inspiring and humbling as I listened to them recount their battle cries in the quest to be heard and their right to have a seat at the negotiating tables. At the end of each speech, each speaker refrained, "We are not defeated. We will not be defeated!" And each and every time that phrase was spoken, the crowd roared, clapped, chanted and stomped their feet in support.

At the end of the plenary a march ensued through the outdoor conference area with youth and older people alike from all over the world calling for change and demanding to be heard. Yes, amid the posturing and sometimes seemingly empty words of politicians, and amid the numerous oil and gas lobbyists, COP 27 was a forum where marginalized voices were to be heard and progress for their benefit was to be made. Indeed, it seems like at COP 27, progress was made.

Negotiations amongst 200 nations ended a day longer than expected with the achievement of a milestone: major polluters agreed to create a new fund to cover the loss and damages that will be incurred by lower-income countries that are caused by climate change. How much money they will contribute to the fund remains to be seen, but it is now something more that we can hold them accountable to.

I've done some reading about conferences such as COP 27 and how we cannot view them as singular events where change either does or does not happen; instead, we should view them as a part of a larger process of negotiating and making progress over time. As an individual, when you live with the daily awareness of the monstrous task of tackling climate change, it is easy to feel overwhelmed, anxious, alone, and hopeless. I, too, have sometimes succumbed to the notion that what I do really won't do anything to stop climate change. However, what I've learned from attending COP 27 is that the first step we should take in supporting youth and other marginalized voices is to simply show up: Show up at events, marches, meetings, and webinars. Once you've done that, and keep doing that, time and time again, you will find other ways to contribute, even if it is just to continue showing solidarity with those whose voices must be heard.

COP27 closes with deal on loss and damage: ‘A step towards justice’, says UN chief

The Peoples’ Declaration for Climate Justice

Vanessa Brown is a parent, volunteer with BE Initiative, organizer in For Our Kids Toronto and a member of the For Our Kids' national JEDI Accelerator Committee.