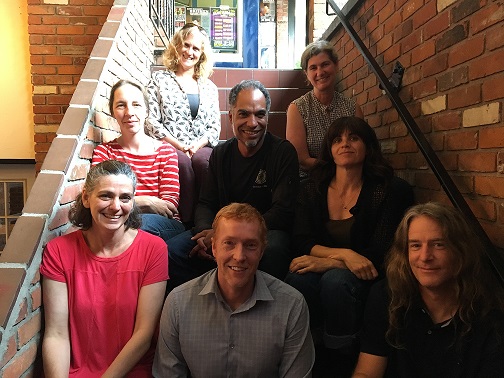 Early in 2019 some parents in Victoria, BC found themselves on a group text. They were the kind of people who are concerned about climate change, and should they get together to discuss? They did.

Some of them had been active before in NGOs or unions, while for others this was their first time. But, they found themselves united by urgency to do act on climate change. And, they also had in common that their kids were in local schools.

They decided to start there - the school system. Other levels of government like municipalities were declaring "climate emergencies" and asking staff for options to step up climate action, so why not the local elected School District too? The school system operates buildings and vehicles - all sources of emissions to be tackled. And of course schools are a potential source of climate education.

So "Parents 4 Climate" was born. The group divided up tasks and started researching how school boards work. Like all governing bodies, they have their processes and procedures, committees and ways of voting, etc. They also researched what a "climate emergency" declaration could look like, helped by the fact that a bunch of municipalities were already doing that.

They discovered that the appropriate District committee to start with in Victoria was the Operations and Planning Committee and booked a delegation (one parent, one student, and one parent) to ask for the declaration. They founded a Facebook group and then reached out for support from Parent Advisory Committees in schools and from teachers and school staff unions. They also drew on relationships to talk ahead of time to some School District Trustees, since ultimately they needed a Trustee to put forward the motion, and also needed a majority to vote for it! They alerted the media.

The Operations and Planning Committee voted in favour of the emergency declaration, and then it sent to the full School Board for it's next meeting. Parents 4 Climate mobilized again for that date, doing more outreach with the public, and even putting on a "fossil fuel free" march to the meeting. Again, local media was alerted.

On Monday, June 24 2019 the Greater Victoria School District became the first in the country to declare a climate emergency. The declaration requires the school board to establish targets and develop strategies commensurate with the Intergovernmental Panel on Climate Change’s call to limit warming to 1.5 degrees, and to demonstrate leadership by encouraging other B.C. school districts to adopt similar measures.

As always, the devil is in the details, so Parents 4 Climate Victoria will monitor the District's progress while it engages in other projects. 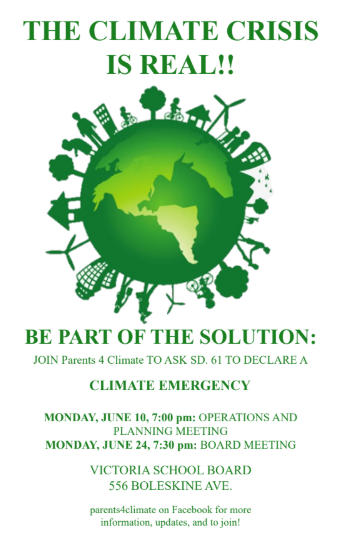