Have you ever seen the monoculture grass on the sides of streets and thought - why can't that be flowers and pollinator habitat?  I had that thought for a few years, especially when I learned that a friend of mine (who ran a daycare) had planted a pollinator paradise of native plants and milkweed for monarchs and due to a bylaw complaint, was told to cut it all down or face a fine. It took a few years (and a few more bylaw complaints from neighbours) before we were able to gather a mass of passionate and motivated individuals to act on this bylaw (Lesson learned #1: simple emails to our councillors were not sufficient to move the needle towards a change that would be equitable to all residents of Ottawa, not just ones that had sympathetic councillors.)

Along with Ecology Ottawa and the Envirocentre, two significant environmental organizations in our city, we worked with Councillor Rawlson King to bring a motion to Ottawa City Council. The motion was brought to the Transportation Committee by Councillor Laura Dudas and presented on May 4 by Councillor King (who we primarily worked with). There was some very interesting insight about "neighbour wars" (e.g. complaints councillors frequently see between two neighbours) but overall councillors were in agreement with the motion and were glad to see that the bylaw was *finally* being updated. For Our Kids parent Raewyn Khosla delegated at that meeting and provided some great answers to questions from the councillors. The motion has now passed city hall and we can't wait to see what the new bylaw draft looks like in 2023 (Lesson learned #2: city bylaws don't change quickly). 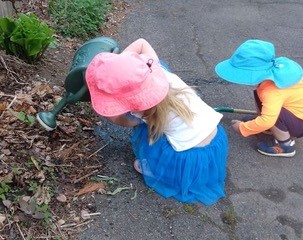 Why did I want to make this happen? Because urban cities NEED better green space and there is SO much climate benefit to planting (especially native) plants wherever we can. During our research it became apparent that planting native plants wasn't just good for pollinators, it improved the soil quality of the green spaces, helped to keep the water in the water table and not overwhelm our stormwater systems, captured carbon, improved access green space and supported mental health (not only by seeing the beautiful plants but also planting them, and building community by chatting with neighbours!).

Here is the strategy we employed:

We hope this helps anyone who may be wishing to naturalize green spaces in their cities! Don't hesitate to reach out if you have questions!

[Yes we even drafted a jingle - though we haven't yet made our Frozen music video yet!]