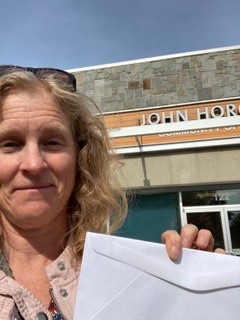 Parents 4 Climate Victoria member Kate Lawes attempts to drop off a letter to BC Premier John Horgan's office on April 30. The letter, written and supported by a collaboration of groups across BC, reminds Horgan of the NDP promise to protect old growth forest and asks for a meeting to discuss how the NDP intend to keep that promise.

The letter is below (it was emailed to Premier because of COVID-19 restrictions).

Last fall, For Our Kids Vancouver sent a BC Election survey to all candidates in several Vancouver and Fraser Valley ridings to find out their stand on the climate crisis with the intent to help voters to elect a climate champion in their riding. The survey results are compiled in this document.

The BC NDP candidates’ response to the question about Old Growth Forests was clear - BC’s old growth forests are a critical component of meeting BC’s climate targets and should be protected.

The protection of old growth forests was also part of the BC NDP election promise:
"A re-elected BC NDP will implement the full slate of proposals from the Old Growth Strategic Review Panel. We will act on all fourteen recommendations and work with Indigenous leaders and organizations, industry, labour and environmental organizations on the steps that will take
us there."

Despite the current challenges we are facing in this pandemic, the climate crisis will have a much more severe impact, much sooner than expected. The climate crisis needs to be dealt with now, and old growth forests play an important role in this. After six months of majority government, we are requesting a meeting to hear about the progress the BC NDP government is making on the old growth forest protection.

Kindly advise when you are available to meet with us and members from other parent, health professional, and youth organizations from throughout BC.