As parents, we hoped strengthening Bill C-12 would be the best way to secure a safe climate future for our kids - Were we wrong? 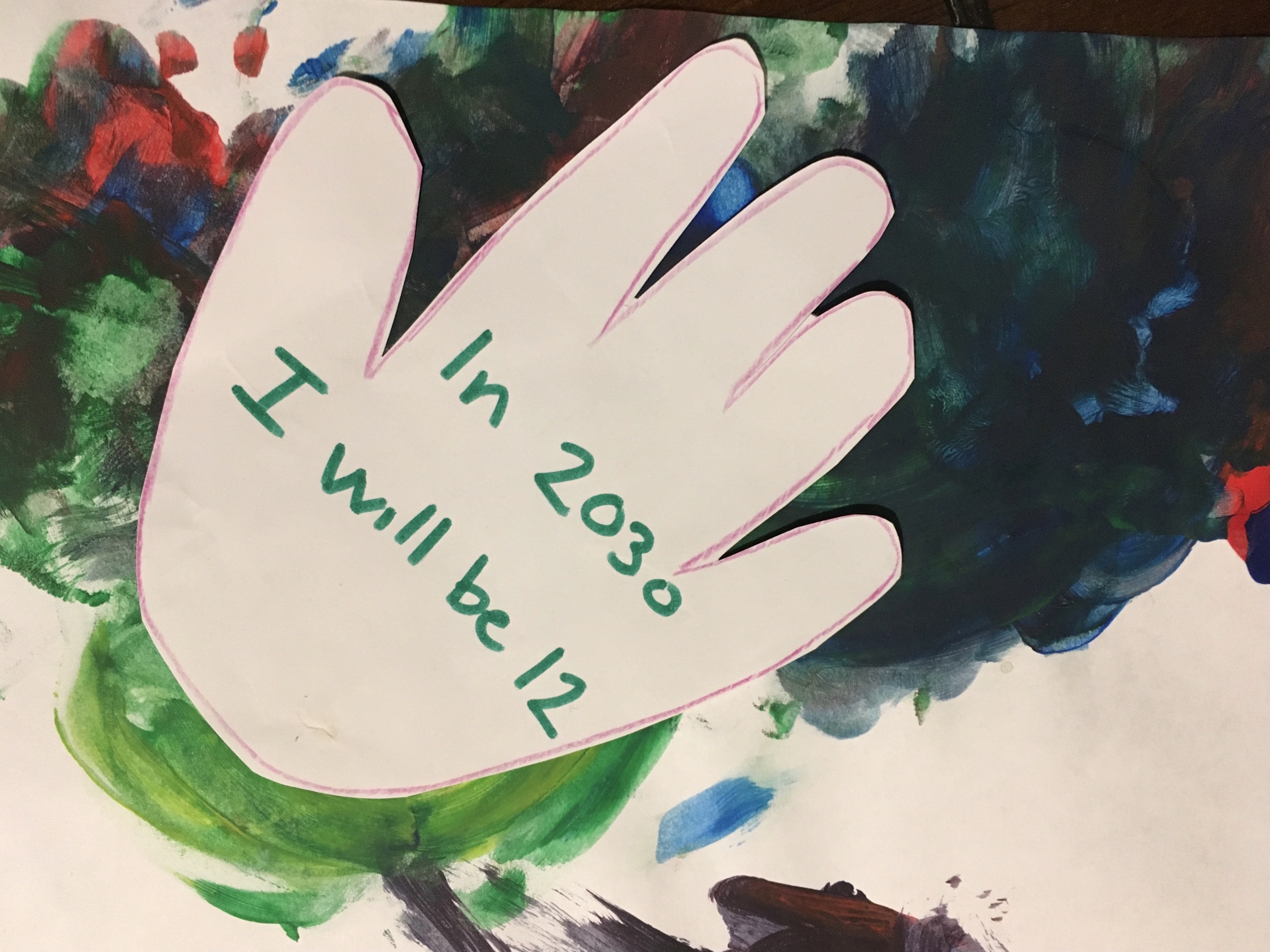 When Bill C-12 was introduced in November 2020, I, like many parents turned climate advocates, was buoyed by the fact that it seemed that our elected officials were FINALLY acting on climate change.  The Bill wasn’t the greatest Climate Accountability Plan (CAP) written but given the IPCC nine year countdown for strong climate action, it seemed that a parent’s best hope for a livable planet for our kids was to strengthen the bill rather than start over. For Our Kids Ottawa / Gatineau (an organization I helped facilitate) joined more than 10 other parent-led climate advocacy For Our Kids (FOK) groups across Canada and began to strategize: what did we need to do to make this Bill into a CAP that WOULD be strong enough to prevent climate chaos and its consequences for our kids.  We met online, studied analyses by environmental groups, and came up with key points of change, all this while working around kids’ nap times, home schooling, meals and bedtimes. Our motivation was to truly make this a law that would protect our children from the most devastating effects of climate change

Then, we let our elected officials know.  We reached out to our MPs and to every member of the standing committee that would review the Bill. We met with them, sometimes more than once. It was surprising and a bit scary to realize that some MPs who would be responsible for one of the most important climate bills had so little understanding of the gravity of the situation. So, as parents, we also became educators.

Some red flags popped up along the way. Before the Bill made it to second reading, the government named members to the CAP advisory body - a body which is supposed to be independent and comprise experts who know the science of climate change - prompting Elizabeth May to call the action a  “disrespectful pre-empting of the committee review of the Act”.  It was also disappointing that the NDP MP Leah Gazan’s private members Bill C-232, which included many improvements to Bill C-12 like requiring full involvement of Indigenous peoples, was quickly defeated in the House.

As Bill C-12 proceeded through the House, parents became increasingly uncertain. Elizabeth May voted against the Bill at second reading: did that mean it would be a better strategy to defeat the Bill and start over again? But knowing that climate scientists have globally called for at least 45% reduction in emissions by 2030, would it be reckless to wait for an election and hope a new government would draft a stronger bill?  Was there even a chance of drafting and passing a stronger Bill?

Things have become even more concerning during the standing committee review. Only 34 witnesses were invited to give testimony to the committee (the selection is made by individual committee members); for a total of 9 hours of testimony and questioning over 3 meetings.  By comparison, Bill C-10, an Act to amend the Broadcasting Act, has already had 20 meetings and heard from 110 witnesses. 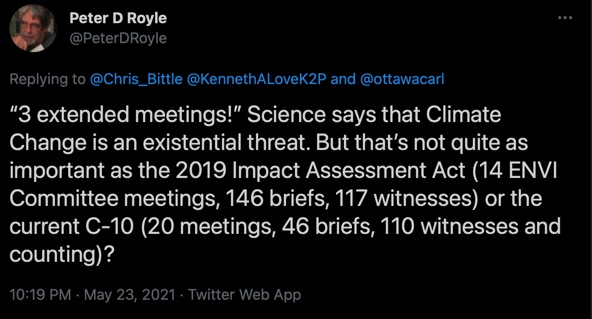 The vast majority of Bill C-12 briefs submitted by experts and members of the public (87%) weren’t made available to committee members until after the committee chair’s deadline for proposed amendments. Clearly the committee members couldn’t have taken them into account before proposing amendments to the Bill. They also were hearing testimony from witnesses up to 24 hours before the deadline for amendments. Why the rush?   “I think it really makes a mockery of inviting the public to send comments when amendments are due before the comments are received.” Elizabeth May commented during the committee. Even Dan Albas commented that the committee needs to think about its process, but merely suggested they do better “next time”.

Equally important are the voices left out of the discussion because they were not invited or not able to provide testimony: climate scientists that could speak toward the need for urgency, Indigenous communities and knowledge keepers, and youth, the generation that will inherit the consequences of this government’s choices. And finally, there is the elementary school recess-like behaviour from committee members. “We don’t want to play ball with Lizzie” is effectively what Liberals and NDP members did by voting down any amendments that were not proposed by themselves. This was noted by Bloc Quebecois MP Monique Pauzé, who asked: “Is this an ideological reason, that people didn’t want to vote on the Greens' (amendment) but are ready to vote on the government’s? I’m wondering,”  We might expect this childish behaviour from our children but this is certainly not appropriate from our leaders.  And so, parents across Canada are left wondering and worried: were we wrong to think that our government was mature enough to listen to its elders and the experts and improve a weak bill to protect the future for our kids?

As parents, we often speak about natural consequences to poor choices and inappropriate behaviour and I think it is time for parents across Canada to remind our elected officials that there is a very obvious political consequence that can happen in 2022. The problem: the natural consequences to weak climate legislation in the meantime are devastating. We can’t wait. We need leaders who WILL heed expert advice, take the time needed to listen and to strengthen Bill C-12 so that it can become a law that is able to protect our planet and our children.

Need a bit more inspiration?  Listen to Dr Kelly Martin's moving testimony on the health impacts of climate change and why we are in a race that we must win for our kids.

And read the briefs submitted by For Our Kids teams across Canada:

From the C-12 submission from For Our Kids Vancouver 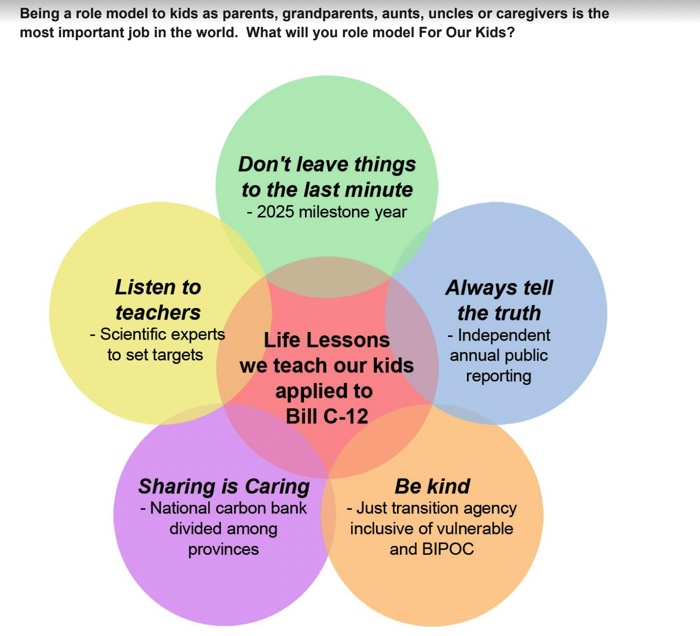 Marianne Ariganello is a scientist, parent and organizer with For Our Kids, a national network of parents and grandparents advocating for climate action for the sake of their children. She co-leads a For our Kids advocacy group in Ottawa