Every December, Ontario's Independent Electricity System Operator (IESO) releases an Annual Planning Outlook, covering electricity supply and demand, generation capacity and transmission infrastructure. This year's report projects that GHG emissions will increase much more steeply than last year's, which was already deeply concerning. The 2021 forecast was for emissions to reach 15 megatonnes in 20 years; now, that number has jumped to 18.6 megatonnes.

This did not happen by accident. It's the result of the provincial government moving backward on climate change for the past three years: backing out of wind and solar projects and removing rebates for electric vehicles. As the demand for electricity increases, the province has neither directly procured more renewable energy, nor opened the electricity market to allow renewable generation to enter the marketplace.

Ontario's government plans to meet the province's increasing demand for electricity using gas rather than renewables like wind, solar and hydro power. They've already purchased out-of-commission gas plants to fill the gap that will result from Ontario's nuclear reactors being retired or refurbished over the coming decade. Right now, gas powers about 7% of the province's electricity. If the plan to replace nuclear energy with gas, GHG emissions from gas plants would increase 300% by 2030 and at least 500% by 2040, according to the IESO. Find more background on this plan here.

What can you do?

IESO's report hasn't garnered much attention in the news, but it's a good opportunity for parents to reach out to their MPPs and let them know their concerns.

Want to get your kids involved? 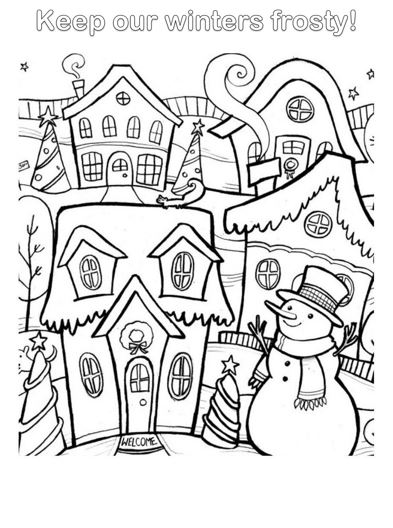 Here's a holiday-themed card they can print out, colour, and send with your email. There's room at the bottom for a message of their own. You could even mail the card to your MPP, or, if you can reach their constituency office, drop it off in person with a copy of your letter.

I’m writing as a parent in your constituency, deeply concerned that every day there is more evidence that our children’s health, well-being, and future existence is being directly and seriously impacted by climate change.

It’s clear on all counts that phasing out gas and transitioning to renewable energy would have multiple short and long-term benefits to the health and well-being of Ontarians; ramping up gas production to power electricity demands would have the opposite effect.

IESO’s recently-released annual planning outlook for 2021 shows a steep increase in the demand for electricity, and an equally high jump in GHG emissions from generating that electricity. Using data from the report, the graph below shows how alarming that increase is. 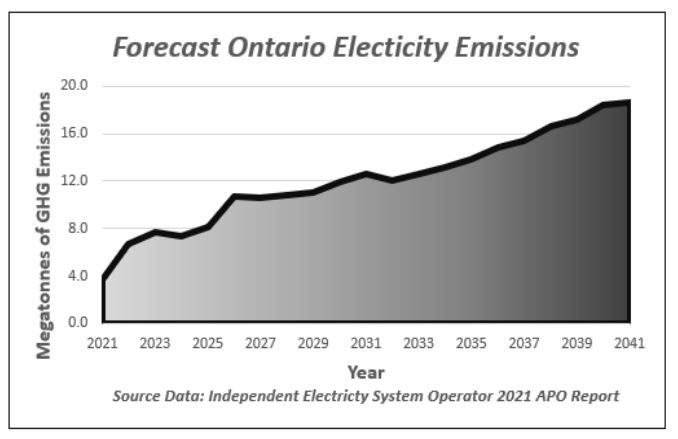 The science, and the growing evidence around us every day, are clear: along with air and water pollution, GHG emissions hasten climate change, leading to more frequent dangerous heat events, more extreme weather events such as flooding and drought which threaten food and housing security, and above all, irreversible damage to the environment. This summer’s Net Zero by 2050 report from the International Energy Agency (IEA) stated clearly that all new fossil fuel projects must be stopped if we are to have a chance at meeting the goal of net zero by 2050.

Increasing GHG emissions endanger the health and well-being of Ontarians by exposing them to extreme weather events, deadly heat-waves, destructive flooding, and more insect-borne disease. This has to be the government’s primary concern, because healthy people and communities are the province’s biggest economic asset.

Canadian Association of Physicians for the Environment (CAPE)’s Call to Action on Climate Health from 2019 cited data linking chronic exposure to fine particulate air pollution resulting from the burning of fossil fuels to 7,100 premature deaths in Canada per year and annual health-related costs of $53.5 billion.

Children are especially vulnerable to the adverse effects of air pollution and climate change as a result of fossil fuel combustion. Due to their rapid growth and immature immune and detoxification systems, unborn children and young children are particularly affected biologically. Children breathe more air per kilogram of body weight than do adults, and require three to four times the amount of food on a body-weight basis than adults, so they are more exposed to pollutants in air and food – pollutants that come from the combustion of fossil fuels. The effects of fossil fuel combustion are long-term, lasting multiple decades as children grow and mature, and they cannot necessarily be reversed. Phasing out fossil fuels as soon as possible will minimize these impacts on children and ensure future generations are not exposed to these health risks.

The impacts on human health are significantly higher for members of vulnerable communities, particularly low-income and racialized communities, who are most often physically situated more closely to the sources of pollution and least resourced to be able to deal with the impacts.

Increasing demand for electricity to power electric vehicles and allow us to transition from fossil fuels should not rely on fossil fuels to get us there. Research and real-world examples show that solutions already exist with the capability to meet Ontario’s electricity demands, and those solutions have been proven to work at the scale needed.

So the choice is clear: increasing gas-powered electricity production would damage Ontario’s people, environment, and economy; investing in renewable energy would help us move into a clean energy future. As your constituent, I call on you to support the use of renewable energy to meet our increasing demand for electricity, and to stand against the destructive move back to gas power.