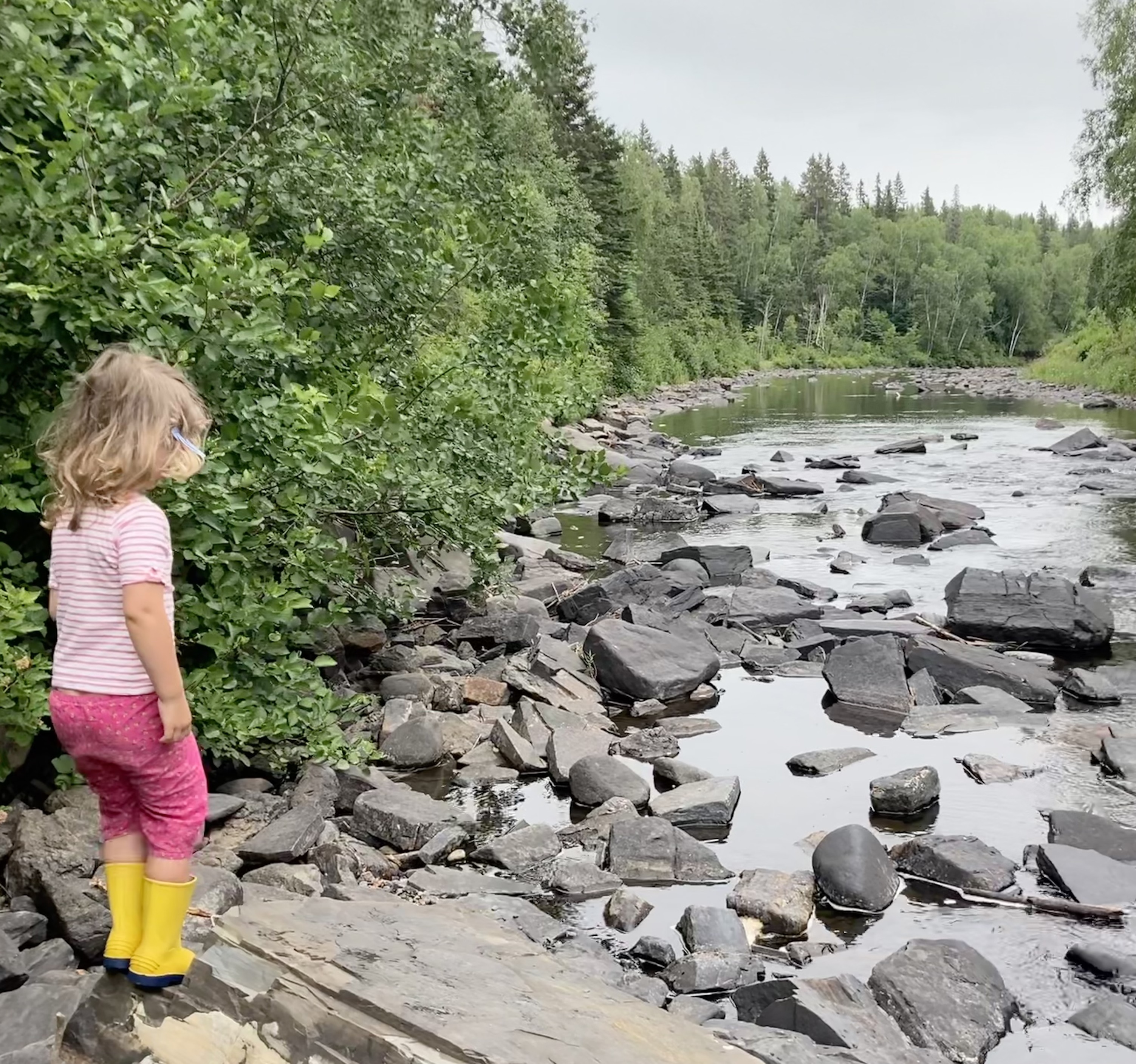 Clean, renewable energy is a viable, reliable, and less expensive way to power Ontario's electricity needs - but the provincial government's plan is to invest in gas plants instead. 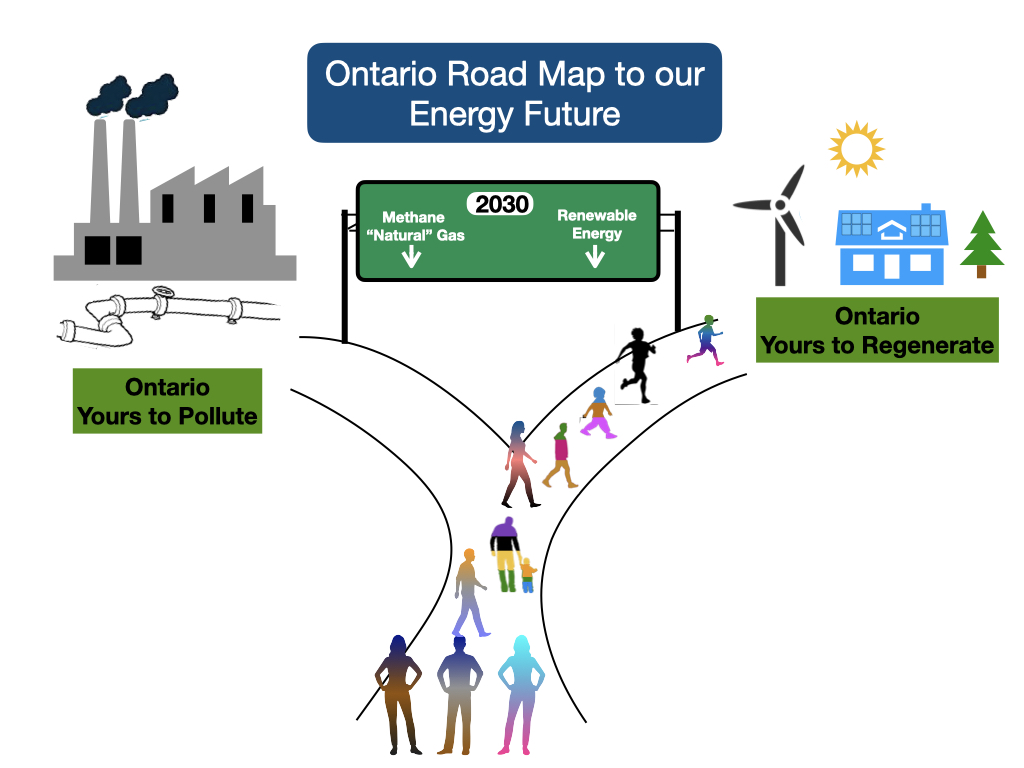 We have a chance to demand a clean energy future for our kids.

In September, Ottawa City Council will be asked to support a motion to request the Government of Ontario to develop and implement a plan to phase out gas-fired electricity generation by 2030.

We plan to delegate at the Standing Committee on Environmental Protection, Water and Waste Management. We will be submitting the following document to the committee and would like to include your signature, do demonstrate that many residents of Ottawa are in support of phasing out gas-fired electricity generation by 2030.  Please sign and share.  (And once you sign, send a copy of the document to your city councillor AND your MPP, explaining that you support a gas-phase out because climate action is a major election issue for you.)

Why does our petition ask for your address? It makes for a stronger petition if we can actually demonstrate to our city council that the names are "real" residents of Ottawa, and city councillors take more notice when it's "their" constituents that have signed the petition.  So if you don't want to give your entire address, just your postal code would be great!

Here are some additional facts that you may find interesting:

Transmission upgrades along existing corridors between Quebec and Ontario would significantly increase the amount of hydro power Ontario could import. These upgrades could cost upwards of $1.44 B, which is relatively low compared to the $25.8 B it would cost to rebuild Ontario’s ten aging nuclear reactors or the $3 Billion Ontario recently spent on purchasing gas plants.

The Rocky Mountain Institute (a US-based, independent, non-partisan, non-profit organization of experts across disciplines working to accelerate the clean energy transition) estimated in its 2019 report that the projected drop in the cost of clean portfolios means that clean energy  sources are likely to be cheaper than the operating costs of 90% of gas plants, as early as 2035. The Growing Market for Clean Energy Portfolios, 2019, Rocky Mountain Institute.

You can read Shawn Menard's Motion below (will open in a new window). 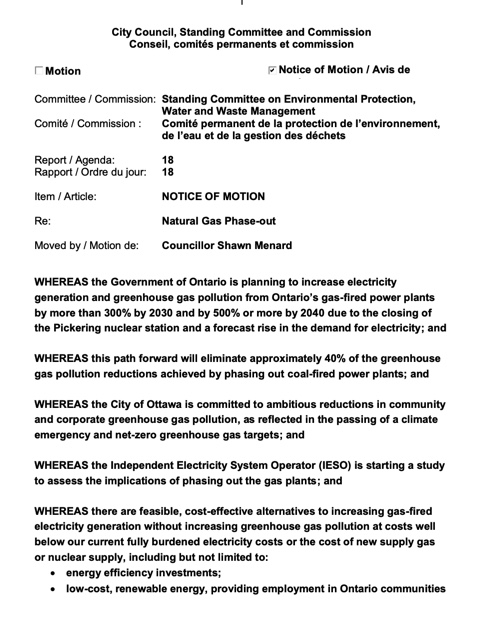 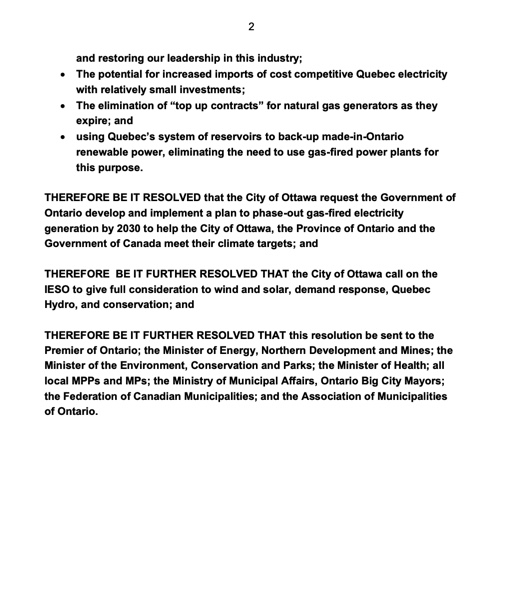 As parents, we represent the “everyday” citizens of Ottawa: voters, taxpayers, and most importantly,  parents concerned that with every passing day there is more evidence that our children’s health, well-being, and future existence is being directly and seriously impacted by climate change.  We fully support phasing out gas-fired electricity generation by 2030.

It’s clear on all counts, made even more apparent with the recent IPCC report, that phasing out gas and transitioning to renewable energy would provide multiple short and long-term benefits to the health and well-being of all Ontarians, not just those of us in Ottawa.

Why we support phasing out gas-fired electricity generation by 2030.

A. Research and real-world examples show that solutions already exist with the capability to meet the reliability needs of Ontario’s electricity demands, and those solutions have been proven to work at the scale needed.

For example, the Ontario Clean Air Alliance’s report: Phasing Out Ontario’s Gas-Fired Power Plants: A Road Map provides clear direction for how replacing natural gas with renewables in Ontario would be achievable by 2030. (It shows how Ontario could reduce electricity consumption by 50% by 2030 just by implementing energy efficiency measures.) Further, a study undertaken by the Pembina Institute showed that  “non-emitting renewable energy portfolios [such as wind, solar, battery energy storage] can reduce consumer costs along with climate and health impacts while delivering the same or greater services as gas plants.” (1)

B. Financially, phasing out gas will be economically advantageous to Ontario families. It is clear that renewable energies are the energy sources of the future.

Wind prices (at 3.4 to 7.0 cents/kWh) and solar prices (at 3.8-5.5 cents/kWh) are lower than Ontario Hydro’s current mid-peak rates of 9.4 cents/kWh. Prices are expected to continue falling through to 2030. (2) Water power is also a reliable source of electricity and has been offered to Ontario from Hydro Quebec at a very favourable price of 5.0 cents/kWh. As a practical example, the city of Cornwall has sourced its electricity from Hydro Quebec for the past 50 years and its residents pay an average of 35% less than Hamilton residents and 40% less than Toronto electricity customers.

C. Phasing out gas-powered electricity generation will have an enormous benefit to human health.

The Canadian Association of Physicians for the Environment (CAPE)’s Call to Action on Climate Health concluded that chronic exposure to fine particulate air pollution resulting from the burning of fossil fuels resulted in 7,100 premature deaths in Canada per year and annual health-related costs of $53.5 billion. (3)

Children are especially vulnerable to the adverse effects of air pollution and climate change as a result of fossil fuel combustion. Due to their rapid growth and immature immune and detoxification systems, unborn children and young children are particularly affected. (5)

The impacts on human health are significantly higher for members of vulnerable communities, particularly low-income and racialized communities, who are most often physically situated closer to the sources of pollution and least resourced to be able to deal with the impacts.

D. For a safe planet we need to rapidly decarbonize our economy. The recent IPCC report has made it clear: GHG emissions hasten climate change, leading to more frequent  dangerous heat events, more extreme weather events such as flooding and drought which threaten  food and housing security, and above all, irreversible damage to the environment.

Gas expansion is inconsistent with the Paris Agreement goals. In fact, the IPCC report says “Most scenarios see power generation almost completely decarbonized by mid-century, even in a 2°C world (IPCC, 2018, p. 112).” (6)  In addition, according to the recent International Energy Agency (IEA) report all new fossil fuel projects must be stopped if we are to have a chance at meeting the goal of net zero by 2050 (7).

From a legal perspective, Ontario is currently being sued by seven youth climate activists for rolling back the province’s climate targets and replacing them with a significantly weaker 2030 target. (8) If, as in a growing number of jurisdictions around the world, the applicants win the case, this will put any plans to ramp up gas plants in jeopardy. Indeed, it would render such plans a liability.

The choice is clear: ramping up gas-plants production would take Ontario backwards;  phasing-out gas plants and investing in renewable energy and the transmission of available hydro power from Quebec would help propel Ontario forward into a clean energy future, and help protect the health and safety of our kids.