COP26 is just days away. Prime Minister Trudeau, the new Environment Minister Steven Guilbeault, the new Natural Resources Minister Jonathan Wilkinson, Deputy Prime Minister Chrystia Freeland, all MPs, and COP26 delegates need to hear from us. As COP26 discussions become flooded with corporate lobbyists putting personal wealth over the health, safety and security of our children, OUR VOICES MUST BE LOUDER.  Please use this letter as a template to write to our leaders to demand that they truly lead the way towards immediate and meaningful global action on climate change. A template letter is also available as a google doc where you can copy and paste into a new email to edit.

Open Letter from FOR OUR KIDS SUNSHINE COAST to the Prime Minister of Canada, Justin Trudeau

We, parents of For Our Kids Sunshine Coast, demand that you attend COP26 in Glasgow with an ambitious and detailed plan demonstrating how Canada will meet its greenhouse gas emissions targets, stop all public funds and licensing for coal, oil and gas expansion and rapidly move away from burning fossil fuels. We expect you to commit Canada to climate justice by financing our fair share of a clean energy transition and adaptation in lower income countries, as well as supporting the transition globally. May your actions uphold human rights and Indigenous rights above all else; may you listen wholeheartedly to the people, the scientists, the experts, the land and water defenders, not the corporations. We are looking to you to be bold on the world’s stage when it comes to climate commitments and real, immediate climate action.

Emissions in Canada have risen every year since the earliest Conference of the Parties and since we signed the Paris Agreement in 2015. Canada can and must do so much better. 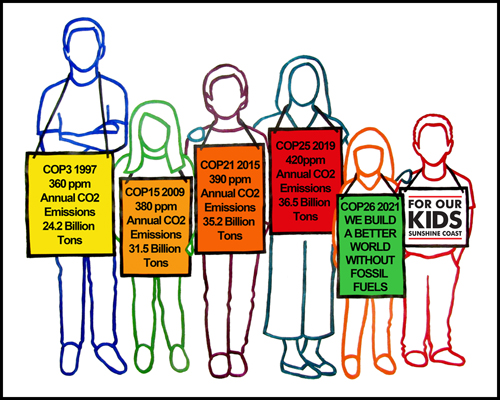 For Our Kids Vancouver member Artist Jana Rayne MacDonald has created this image of kids with our message.

In the wake of a summer of extreme heat domes, multiple heat waves and wildfires in Canada that resulted in over 600 human deaths, enormous financial loss, and the death of billions of sea creatures and animals, dealing with the climate crisis is simply a matter of survival. The most recent IPCC report has stated that the earth could face runaway global warming unless drastic efforts are made to eliminate greenhouse gases. The UN secretary-general called the report a "code red for humanity"  he also said "If we combine forces now, we can avert climate catastrophe. But, as today's report makes clear, there is no time for delay and no room for excuses."

We, parents, are fierce advocates for our children. They should not have to carry the weight of addressing climate devastation on their shoulders. Children the world over should not be living in fear, suffering from eco-anxiety, and begging for action from political leaders. They rightfully demand a habitable planet.

Prime Minister Trudeau please be a bold climate leader at COP26.  Address the climate crisis as the existential threat it is. No empty promises without meaningful action and clear accountability. We are asking you to put the needs of future generations ahead of everything else.You, Prime Minister Trudeau, can be the catalyst that mobilizes Canada and other nations at COP26.

Please do this For Our Kids and for humanity.

For Our Kids
Sunshine Coast

For Our Kids National has also made suggestions for other actions you can take in the lead up to and during COP26 here.