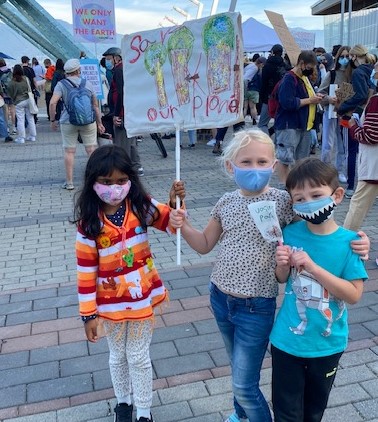 We're calling on parents and kids to help them say YES!

Three ways you can participate:

1. Email your councillor to tell them you support the FFNPT. You can use this online email tool from Dogwood to help. Either send the message as is with one click, or add your own words to tell your councillor why this is important for you and your kids. Telling your story always makes a bigger impact on decision-makers: share something about who you are, how your family is involved in the community, and why you're speaking up for a healthier, more sustainable future for your kids.

2. Join us in front of Burnaby City Hall, 4949 Canada Way at 3:30 pm on Monday, Jan. 24th. Bring your kids! Grandparents and grandkids, aunts and uncles - anyone who cares about our kids' futures is welcome. Be ready to make signs, chalk the sidewalk, and greet councillors on their way in to the meeting where they'll cast their votes. All Covid protocols will be followed.

3. Share this link to the event with your network: family, friends, colleagues, neighbours and anyone you think would be interested.

If you live outside Burnaby and want to bring the vote for a FFNPT to your city or town council, sign up for Force of Nature's campaign.

Why do we need a Fossil Fuel Non-Proliferation Treaty?

It's abundantly clear that our extraction and use of oil, gas and coal are the root cause of global warming and the climate crisis we're watching unfold before our eyes, including the heat domes, wildfires and flooding that devastated so many communities in BC over the past year.

The call for a FFNPT is a global initiative calling on municipalities and countries to support a binding agreement to phase out fossil fuels and support a just transition so that no one is left behind. This doesn't exist right now, despite the Paris agreement.

Why should Burnaby endorse a FFNPT?

Our city council declared a climate emergency in 2019, and has shown climate leadership in the past. Our neighbours in Vancouver, North Vancouver, West Vancouver and New Westminster, have endorsed the treaty, and globally it's spreading across the US, the UK, European Union, Australia and Central America.

Endorsing a FFNPT shows commitment to the bold climate action that's needed now to change course and redirect resources to building a healthier, equitable, sustainable future for our kids. And it will call on governments at all levels to work together toward that goal.

Why should you show up?

Your voice counts at city hall. Councillors rely on their constituents to share their thoughts on issues. Emails and phone calls are good, and being part of a group of citizens outside city hall is a great way to catch their attention.

Most of all, your kids need you to show them you care about the world they're living in, and to model citizen engagement.