The bread and forest march: for the love of our children

On Mother's Day, the Mères au front (Mothers step in) movement, created to hold decision makers accountable for their (non)actions on climate, and the organization Ma place au travail (My place at work), created to deal with the lack of places in educational daycare services, organized a massive gathering in Quebec City. Thousands of mothers and grandmothers from 13 different Quebec regions accompanied by their children, families and allies marched towards Quebec’s National Assembly. Driven by love for their children, they came to celebrate Mother's Day in a different way: "We don't want flowers or chocolate, but the political courage to face the greatest threat of our time: the climate and social crises." 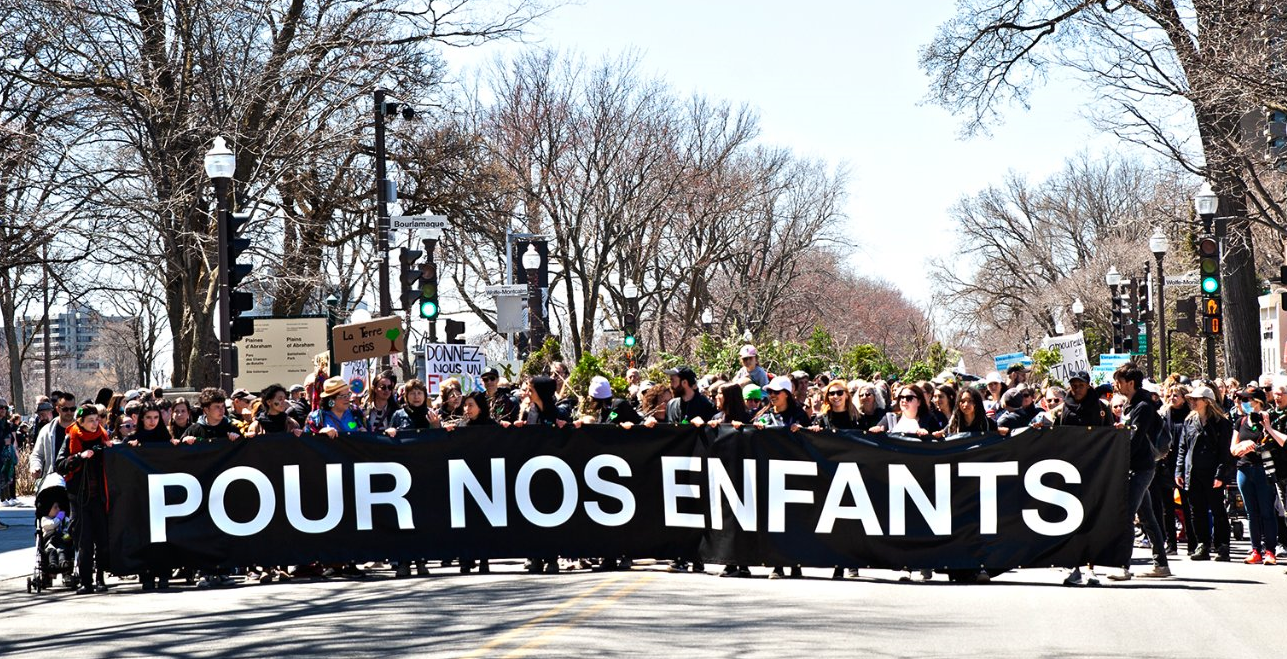 As early as its creation in 2020, Mothers step in had considered the idea of a large gathering. The pandemic turned this plan on its head and it was not until two years later that the project was finally able to come to fruition. In March 2022 the conditions finally looked conducive to our original idea and the decision was made to go ahead with the march; we barely had two months to organize everything. From the start, we knew we wanted to go to the National Assembly of Quebec, especially since there will be provincial elections on October 3rd.

Mothers step in and My place at work felt it was strategic to their demands to the Legault government choosing one each:

As soon as the idea was launched, the enthusiasm was palpable. It was clear that mothers, families and their allies needed to meet together and express themselves in the public sphere. The pandemic had prevented us from this critical exercise in democracy for too long. We also needed to march because of the rapid growth and scale of the environmental crisis and social justice.

Mothers step in has used art to convey its messages since its creation. It is therefore not surprising that the artistic aspect of this march was as important as the political ones. We are lucky that one of the co-founders of the movement, Anaïs Barbeau-Lavalette, a very talented movie director and novelist, was able to mobilize the artistic area and has been able to mobilize in a very short time an impressive number of artists from different backgrounds in a very short time. The event was conceptualized and articulated by combining different artistic components (the moving forest, the body cry, poetry) with powerful speeches and messages. 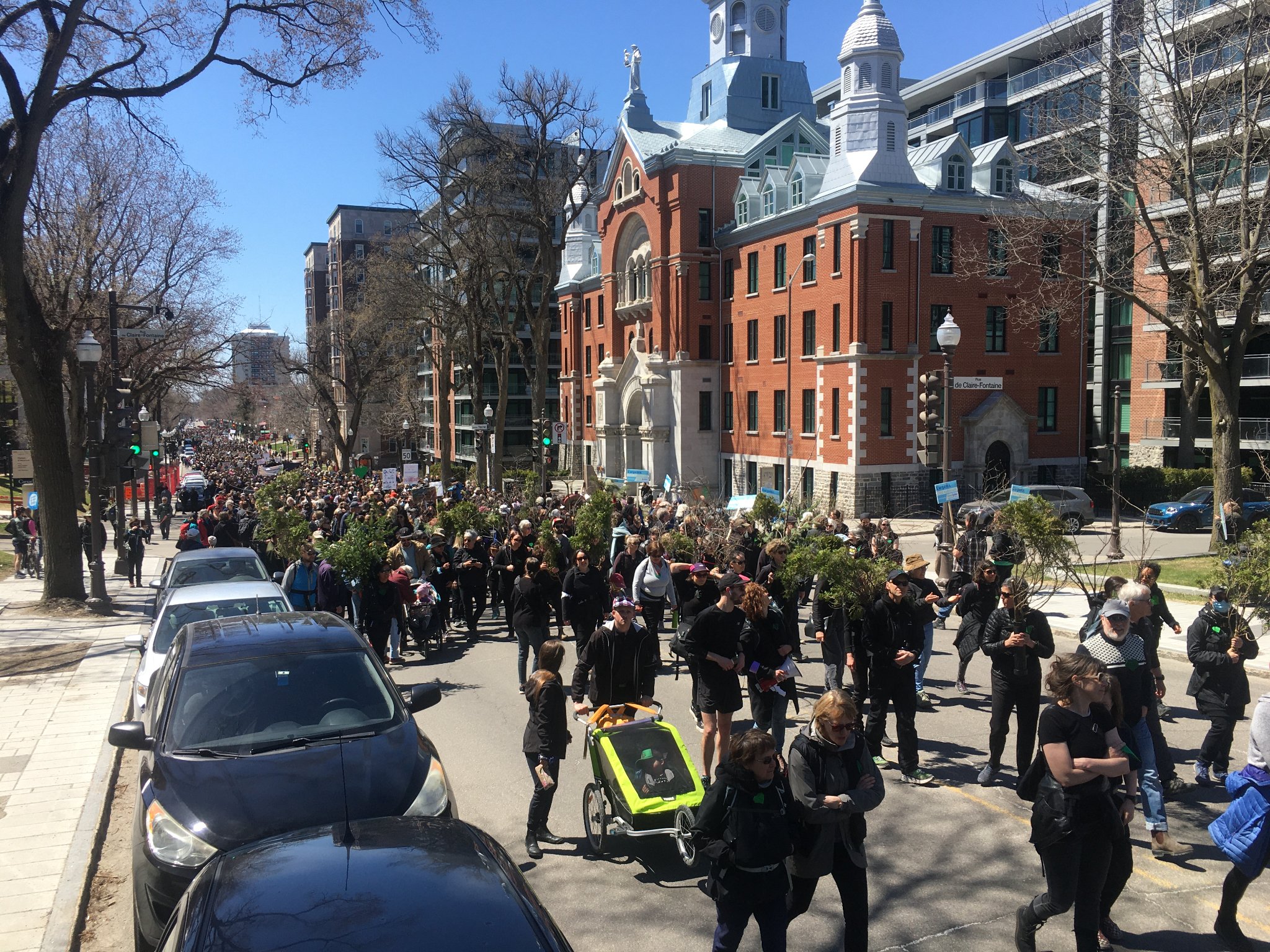 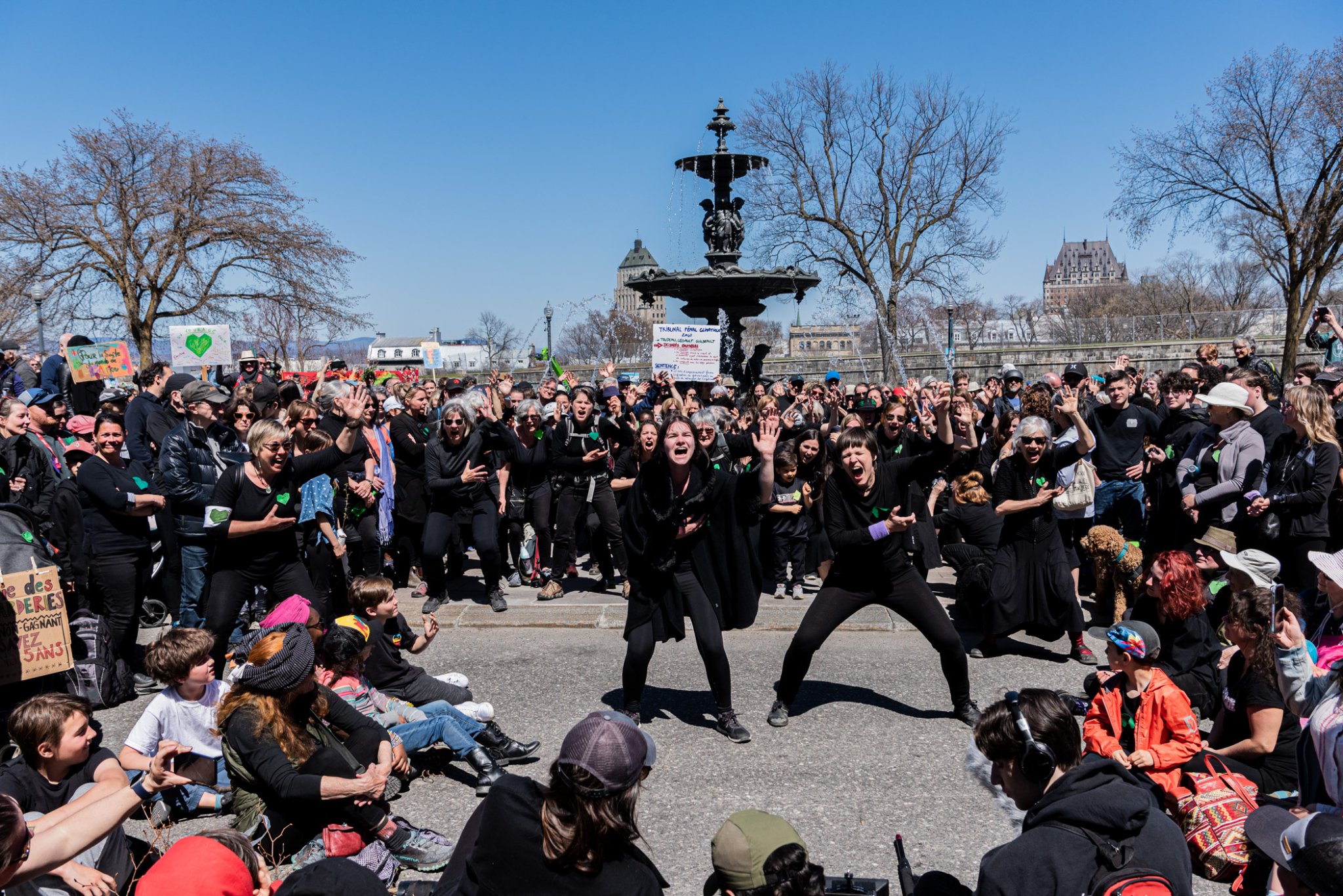 The organization of the Bread and Forest Walk was full of challenges. The first was to align the objectives and visions of two movements, Mothers step in and My Place at Work. One thing is certain, we knew from the start that despite the inherent challenge of bringing together two movements that had never worked together, there were obvious links in our common struggles: the precariousness of mothers caused by the lack of available spaces in daycare facilities and the environmental crisis.

The second challenge was undoubtedly the short period of time to organize such an event, including securing funds to provide transportation for the participants. Along the way, we had no choice but to drop several ideas and focus on the strongest ones to maximize their impact and their feasibility.

Despite the obstacles and challenges, we owe the success of the march to a number of things: an efficient and centralized coordination, access to qualified people experienced in the organization of such events, over 100 volunteers, significant media coverage (especially the week preceding the march) and above all, the eagerness of mothers and their allies to come together and to express loudly and clearly their love for their children and their unwavering intention not to give up in the face of the lack of sense urgency among our elected officials.

We came together, five thousand strong, for a beautiful Sunday on Mother’s Day. These thousands of sparks will undoubtedly ignite others. This march is only the beginning! 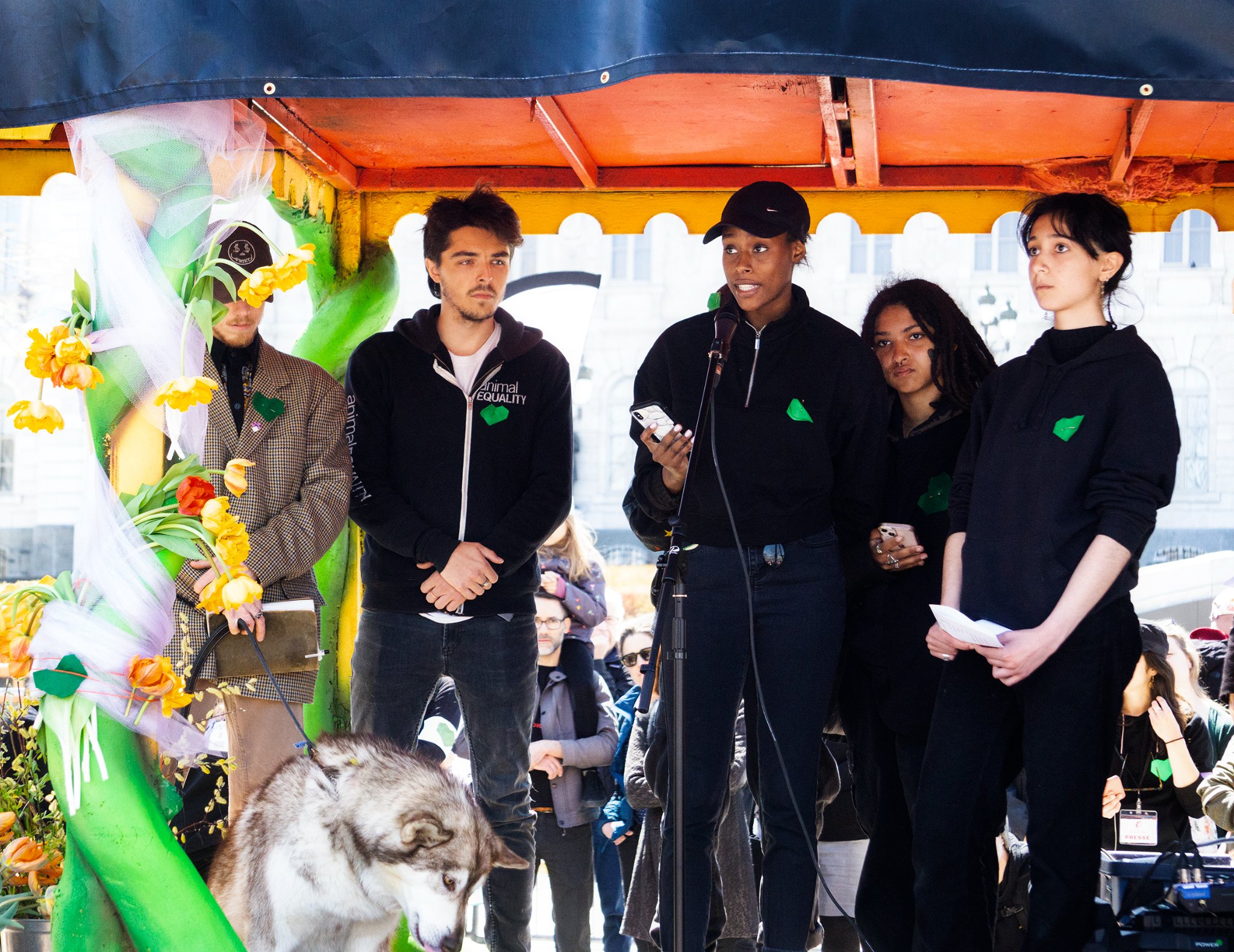 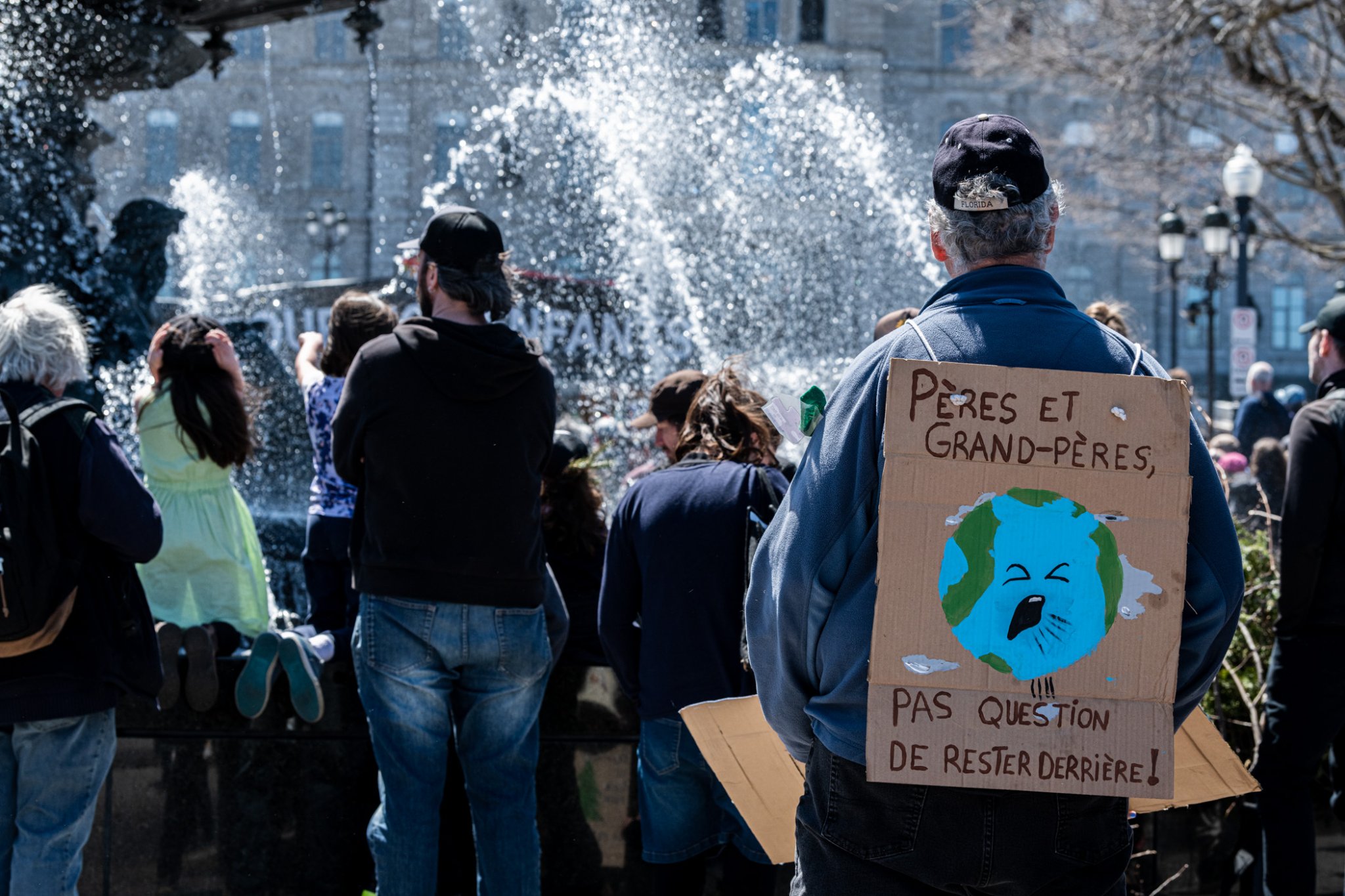