RBC CEO Dave McKay receives Order of Ontario, despite RBC being the 5th biggest funder of fossil fuels in the world.

This Monday, RBC CEO Dave McKay, was appointed to the Order of Ontario, the province’s highest civilian honour, in recognition of his supposed philanthropic commitment and initiatives to uplift youth across the province.

The award is intended to celebrate exceptional Ontarians who’ve left a lasting legacy in the province. That’s why we were so disheartened to see McKay’s name on the list. And we were not the only ones. For Our Kids set up a letter of objection last week, and received 680 signatures within a few days. 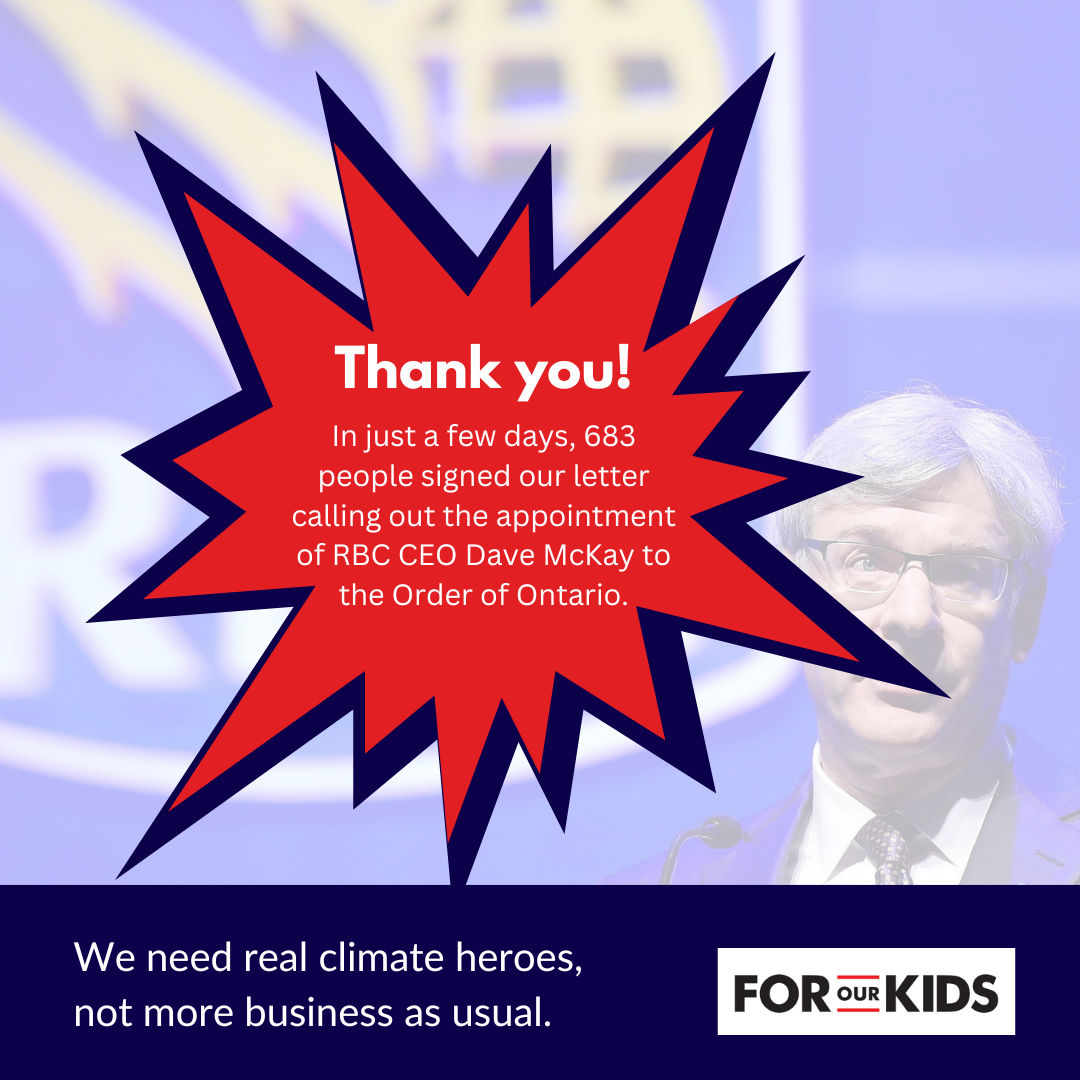 As CEO of RBC, McKay will certainly be remembered, in Ontario and around the world – not for his philanthropy, but as one of the most powerful enablers of “business as usual” at a time when we need true leadership and rapid change.

During McKay’s tenure as CEO, RBC has invested over $260 billion in fossil fuels, making it the 5th biggest fossil fuel funder in the world. Despite promises to draw down investments in line with climate targets, RBC is on track to exceed 2021 fossil fuel financing in 2022, even as scientists warn that any new oil and gas is incompatible with staying below 1.5°C of warming.

RBC has an abysmal record on Indigenous rights and sovereignty. They are the top funder to the Coastal Gaslink Pipeline, which is currently drilling under the sacred waters of the Wedzin Kwa without the consent of the Wet’suwet’en. The inspiring resistance of the Wet’suwet’en land defenders on their unceded territory has drawn support across the country, but RBC has refused to withdraw funding, despite their supposed commitment to reconciliation. RBC finances countless other fossil fuel projects in Canada and abroad that have failed to obtain free, prior and informed consent from Indigenous peoples, while causing irreparable damage to their territories.

And as of last month, RBC is officially under investigation by Canada’s Competition Bureau for “greenwashing” their investments and misleading consumers about their commitment to climate action, revealing a disturbing disregard for public trust.

It’s particularly vexing to see McKay lauded for his support of youth, as young people across the country deal with unprecedented anxiety over the climate crisis and fight bravely for their own futures, even holding McKay himself to account. As leaders like McKay underplay the scale of the climate crisis and slow-walk solutions, it’s the youth who are clear-eyed, demanding urgent action on behalf of all of us.

By granting Mr. McKay this appointment, the Ontario government is ignoring growing public outcry against the corporation he oversees and betraying the values Ontarians hold dear, including reconciliation and a safe, equitable future for all of our children.

When we think about Ontarians who inspire us, we think of the 7 young people who are in the midst of  a lawsuit against the government of Ontario for weakening its climate targets in 2018. And Autumn Peltier, chief water commissioner for the Anishinabek nation who at 17 years of age is an internationally-respected advocate for clean drinking water. How are we recognizing and supporting them in making this province and the world a better place?

This is no time to be celebrating the status quo and encouraging those in power to keep profiting off our collective future.